We've pointed out for years that, contrary to popular opinion, repeated studies have shown that things like intellectual property rarely drive innovation. Instead, the biggest drivers of innovation are things like need and competition. Competition is a big one, and intellectual property works against competition by limiting the competition, and thus potentially slowing down the pace of innovation. Of course, this message is often difficult for people to realize. DV Henkel-Wallace points us to a fascinating story by the CEO of an accounting software company, who had a falling out with her VP of sales, who immediately set up a nearly identical accounting software company. The reaction by the CEO was to take the typical "intellectual property mindset" approach, which meant hiring lawyers and suing. The whole legal situation turned out to be a mess:

I initially thought that litigation would be the most effective approach. We spent quite a bit of money building a lawsuit against her and finally initiated an intellectual property action against her.

We battled it out with lawyers for months and spent tens of thousands on legal fees, but neither of the lawsuits was resolved in the end. We learned that intellectual property suits are difficult to prove and our attorney said that ultimately our legal expenses could come to seven figures, with only a 50 percent chance that a court would rule in our favor. So we dropped the suit and went to mediation, but that didn't come to a satisfactory resolution either.

So after all that wasted time and money, she finally realized that she could just try to compete in the market place, and beat her former VP by out-innovating that competitor. And it worked:

Once I realized we were wasting valuable time, resources and money in court, I decided to focus all of that energy on outdoing our competitor instead. We vowed to differentiate ourselves by focusing closely on our clients' needs. Innovation became very important. When we started out we only offered a single software option. Now we have six tailor-made modules to meet the varying needs of companies of different sizes and industries. We might not have worked so hard to build out new tools if we hadn't had a competitor biting at our heels.

More than six years later, we still compete with her product, but we've enjoyed terrific success in that arena. As devastating an experience as this was at the time, it made BlackLine stronger in the end. We're on track for more than $10 million in revenue in 2010 and are growing steadily. Even better, our current clients are happy with our software, and they're spreading the word: We added 33 new clients just last quarter. We're confident that our client-focused approach has made us the leader in our field. Above all else, I've learned that it’s best to take the high road and commit all time and resources to being the best and -- not worrying about what other companies are doing.

Though my sales VP’s actions were devastating to me personally and to the company, she helped us in the long-run.

No matter how many times we make this point, people still go through the natural reaction to freak out about others copying them. And it is a natural, instinctive reaction. I can totally understand that. However, when you think through logically, the best strategy is rarely to focus on things like patents or copyright, but focus on simply out-innovating the competitor. If all they really did was copy your product, they probably don't understand it or your customers nearly as thoroughly as you do. Take advantage of that and become a leader in the market by innovating, rather than holding back innovation.

The key here is competition. Stagnancy is the enemy of all things worth paying for. Without competition, everything gets weaker with or without 'intellectual property' rearing its ugly head. It's applicable for the industry level, the company level, and the individual level. Human instinct is built for competing. We need to have the target in sight or be the target in order to be effective. 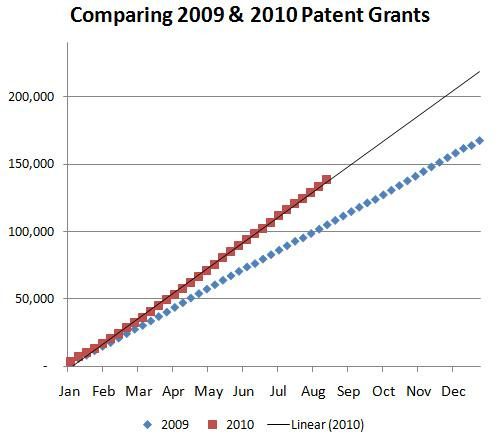 Prepare for more innovation stagnation as the USPTO catches up on its backlog by bringing the rubber stamp back out. Stories of defensive litigation, prior art, and intellectual asset portfolios will make the news again. And everyone will suffer for it save for the patent attorneys.

I attended a seminar discussing intellectual property and patent law
this week and the only logical conclusion I can come to is that IP
regulations are designed to squander innovation while padding the
coffers of patent lawyers. They are the only "winners" in any
scenario. There were discussions of "offensive" patent strategies,
"defensive" patent strategies. We were encouraged to spend tens of
thousands of dollars now in an effort to build a patent portfolio or
apply for provisional patents in a delaying strategy to prevent
spending millions of dollars in defending IP suits. Even the lawyers
that worked for the same organization operated as if we were the
enemy. I was reminded that I signed (or should have signed) a
confidentiality/non-compete agreement and that all works produced on
company equipment for the company belongs to the company.

As someone who works with IP on a daily basis, I find the entire
concept to be a waste of time. We spend untold resources in order to
work collaboratively but the moment that collaboration includes
someone outside the designated circle of trust, everyone starts
looking for a way someone to sue. I understand that I work under a
Pay for Play mechanism so that my work is for the benefit of the
company. I realize that the company makes more money off my Play than
they are paying me for it but come on! I feel that the software
industry (or maybe IT as a whole) is still young (naive?) enough to
believe in the power of community. After all, we have sites like
StackOverflow and CodePlex in addition to the hundreds of OSS projects
that get the support of the best and brightest of the industry. As
more money and bigger players gets involved you can be sure there will
be less and less sense of community. We do not have any unions or
collaborative bargaining agreements yet, but are they far from being
realized? I hope I'm wrong.